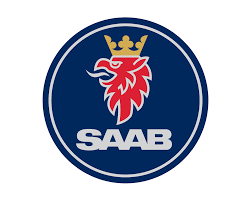 Saab Automobile AB was a manufacturer that was founded in Sweden in 1945 when its parent company, Saab AB, began a project to design a small automobile. The first production model, the Saab 92, was launched in 1949. In 1968 the parent company merged with Scania-Vabis, and ten years later the Saab 900 was launched, in time becoming Saab's best-selling model. In the mid-1980s the new Saab 9000 model also appeared.

In 1989, the automobile division of Saab-Scania was restructured into an independent company, Saab Automobile AB. The American manufacturer General Motors (GM) took 50 percent ownership. Two well-known models to come out of this period were the Saab 9-3 and the Saab 9-5. Then in 2000, GM exercised its option to acquire the remaining 50 percent. In 2010 GM sold Saab Automobile AB to the Dutch automobile manufacturer Spyker Cars N.V.

After many years establishing a sound engineering reputation and ultimately a luxury price tag, Saab failed to build its customer base beyond its niche following. After struggling to avoid insolvency throughout 2011, the company petitioned for bankruptcy following the failure of a Chinese consortium to complete a purchase of the company; the purchase had been blocked by the former owner GM, which opposed the transfer of technology and production rights to a Chinese company. On 13 June 2012, it was announced that a newly formed company called National Electric Vehicle Sweden (NEVS) had bought Saab Automobile's bankrupt estate. According to "Saab United", the first NEVS Saab 9-3 drove off its pre-production line on 19 September 2013. Full production restarted on 2 December 2013, initially the same gasoline-powered 9-3 Aero sedans that were built before Saab went bankrupt, and intended to get the automaker's supply chain reestablished as it attempted development of a new line of NEVS-Saab products. NEVS lost its license to manufacture automobiles under the Saab name (which the namesake aerospace company still owns) in the summer of 2014 and now produces electric cars based on the Saab 9-3 but under its own new car designation "NEVS".